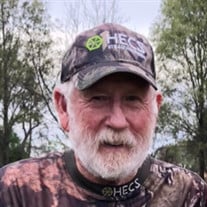 The town of Maury City lost a dear friend when Billy Gibson, 78, passed away from Covid complications on October 27, 2020. Billy was preceded in death by his loving wife, Stella Reece Gibson. He leaves behind his daughter, Stacy (Marty) and their son Ayden (aka Otis), and his fur-daughter, Daisy. He is also survived by his sister, Rita Stokely, Stella's sisters Marilyn Brewer, Rodger McClanahan (Davie) and Gloria Turman (Joe), his nieces and nephews, as well as a host of wonderful friends. Billy was preceded in death by his parents, James and Quay Gibson, his brother and sister in law Dewey (Sonny) and JoAnn Reece, as well as Stella's parents, Dewey and Stella Reece. He was a long-time member of the First Baptist Church in Maury City. He was a true example of God's love as he humbly helped others. He was quick to help a friend or neighbor in need. For 36 years he and Stella worked side by side, in their own businesses. He was involved in everything his daughter did from cheerleading and riding horses to repurposing furniture and helping her open a small boutique after her mother died in 2019. Billy served on the town board for the Town of Maury City for over 20 years. He deeply loved the town and the people in Maury City. He was quick to help with any project for the betterment of the City. Most recently, he spearheaded a fundraiser for the Jurnett Family Monument in the Park. Hunting was a favorite pastime of his, second only to spending time with his grandson, Ayden, aka Otis. Their love for one another was unmatched. He could often be seen sharing stories or pictures of Otis. In his younger years, he had a tremendous passion for cars and enjoyed rebuilding them. Billy was a man of integrity and a true friend to many. He liked things done right and did not mind using 4 screws when 2 would have done the job. He could build, make, or repair anything. Billy will be greatly missed by his family, but also his community and the county. A Celebration of Billy's life will be held in the Maury City Park on Sunday, November 1st at 2:00. Please dress casually. Seating provided. Memorials can be made to Stella's Pantry, an outreach program of the First Baptist Church Maury City, at P.O. Box 336 Maury City, TN 38050 (Please note Stella's Pantry on your check) or N.O.A.H.(Neighbors Offering Assistance and Hope)@ P.O. Box 94 Alamo, TN 38001.

The town of Maury City lost a dear friend when Billy Gibson, 78, passed away from Covid complications on October 27, 2020. Billy was preceded in death by his loving wife, Stella Reece Gibson. He leaves behind his daughter, Stacy (Marty) and... View Obituary & Service Information

The family of Billy Caldwell Gibson created this Life Tributes page to make it easy to share your memories.

The town of Maury City lost a dear friend when Billy Gibson,...

Send flowers to the Gibson family.