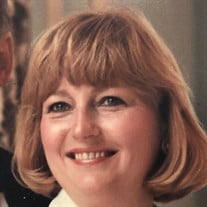 Funeral services for Cathy Elizabeth Leonard Johnson, 70, will be held on Tuesday September 15, at 1:00 P. M. at the Friendship Funeral Home with Rev. Tommy McElyea officiating. Burial will follow in the Elizabeth Cemetery, near the rural community where she grew up. She was born in Dyersburg, TN, daughter of the late James Huey and Neldred Earline Hannah Leonard, and graduated from Friendship High School. She attended the University of Tennessee at Martin, and she was a member of the Elizabeth United Methodist Church her entire life. Cathy married Army 2Lt. Thomas Atkins in May, 1971, and soon left for assignment in Heidelberg, Germany. They became fluent in the language, and avid skiers, eventually becoming ski instructors in Austria. Returning to the U.S. in 1979, Cathy completed her education at the (now) University of Memphis. Moving to Pirmasens, Germany in 1983, Cathy began her professional career as a counselor, specializing in drug and alcohol issues. Transferring to SHAPE, Belgium, (the NATO Military HQ), she was promoted to Manager of the Army Substance Abuse Program. At SHAPE, Cathy met and Married Army Colonel Ralph Johnson, and they began their life of travel and adventure together. During the Desert Storm conflict, Cathy was temporarily promoted to GS13, as the Acting Director of Personnel and Community Activities, a Lieutenant Colonel position. She was an excellent home cook, and attended a course at the world renown Le Cordon Bleu Cooking School in Paris, France. Cathy collected recipes from every place she ever lived, including the U.S., Europe, and Saudi Arabia, which she compiled and published in her highly acclaimed cookbook. She is survived by her husband, Ralph Johnson of Lakeway, TX, her brother, Larry Leonard of Friendship, TN, step children Christine Ritter of Arlington, TX, Brian Johnson of Cheshire, CT, four step grandchildren, two step great grandchildren, and three cousins. Pallbearers to serve will be Ronnie Vernon, Mike Harber, Mike Ferrell, Clyde Young, Michael Vernon and Casey Burnett. Visitation will be at the funeral home on Monday evening Sept. 14, 2020 from 5 p. m. until 8 p. m. Due to the Covid-19 social distancing and masks will be required and attendance at one time will be limited. Friendship Funeral Home 731-677-2673.

Funeral services for Cathy Elizabeth Leonard Johnson, 70, will be held on Tuesday September 15, at 1:00 P. M. at the Friendship Funeral Home with Rev. Tommy McElyea officiating. Burial will follow in the Elizabeth Cemetery, near the rural community... View Obituary & Service Information

The family of Cathy Elizabeth Johnson created this Life Tributes page to make it easy to share your memories.

Send flowers to the Johnson family.