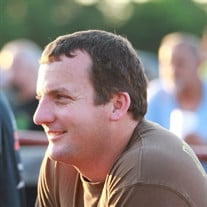 Services for Drew Stephen Rice, 29, Friendship, will be 2:00pm Monday, September 26, 2016 at the Crockett Mills Community Center with Rev. Trevor Sewell, Kyle East and Chris Bates officiating with burial following in the Bellevernon Cemetery. Mr. Rice died Thursday Sept. 22, 2016 at the Regional Medical Center in Memphis after a farming accident. He was born in Jackson, TN son of Steve and Laura Burnett Rice but had lived his entire life in the Friendship Community. Mr. Rice was a self employed farmer and a member of the Elizabeth United Methodist Church. In addition to his parents he is survived by his wife Cynthia Beaver Rice, daughters, Alyssa and Makenzi Rice, brother, L. B Rice (Lauren), sister, Holly Crook (Cleve) all of Friendship, grandparents George & Jane Rice, Lynn and Faye Burnett, Jean and Gary Richardson, in laws Chris and Vicki Beaver, brother in law, Dylan Beaver, sister in law Callie Shamlin. Drew Rice was the perfect husband, father, son, grandson, uncle, and most of all FRIEND. He never met a stranger and after you met him you never forgot him, Cynthia, Alyssa, and Makenzi were the loves of his life. He loved cotton farming and never wanted to do anything else. He loved speed and power from four wheelers, trucks, and tractors. Everything had to be chrome, super speed, chipped and lets not forget smoke!! Tractor pulling was his obsession. He loved the feel of the power and smoke. He worked all week for the full pull! Drew's alias was Jackerand Fred. He leaves behind a multitude of friends and loved ones and most of all his tractor pulling family in the USA Pullers. FULL PULL DREW RICE ON SATISFACTION! Pallbearers to serve will be Sam Green, Dylan Beaver, Jeremy Young, Joel Brown, Danny Gwinn, and Ronnie Vernon. Honorary pallbearers will be Josh Travis, Larry Joe Prescott, Barry Hinson, Shane Bowling, Juan Buendia, Adam Young, J. D. Marbury, Donald Prescott and Michael Williams. Visitation will be at the Crockett Mills Communtiy Center 3-8 p m on Sunday Sept. 25, 2016. Memorials may be made to the Dyer County Humane Society. Friendship Funeral Home 731-677-2673.

The family of Drew Stephen Rice created this Life Tributes page to make it easy to share your memories.

Send flowers to the Rice family.