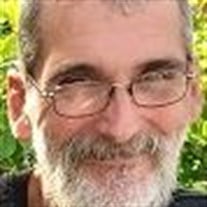 A celebration of life for James Eric Triplett, 50, will be held at 1:00 p.m. on Monday Dec. 2, 2019 at the Friendship Funeral Home with burial to follow in the Friendship Cemetery. Mr. Triplett died on Friday November 29, 2019 at his residence... View Obituary & Service Information

The family of James Eric Triplett created this Life Tributes page to make it easy to share your memories.

A celebration of life for James Eric Triplett, 50, will be held...

Send flowers to the Triplett family.