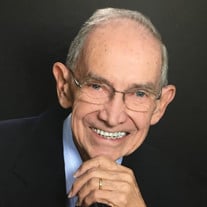 James “Jim” Bradley Wilson, 84, of Jackson, TN passed away on Thursday, October 13, 2016 in the presence of his loving family. Jim was born in Troy, NY on January 27, 1932, the sixth of seven children to Robert Bradley and Helen McGowan Wilson. He was a graduate of Catholic Central High School in Troy, New York and a Magna Cum Laude Business graduate of Cleveland State Community College. He served in the United States Air Force, then went to work for the Bendix Division of Allied Corporation. After 36 years, he retired as Manager of Marketing Services. He later went to work for Jackson-Madison County General Hospital (JMCGH) as the Coordinator of Management Development, and retired from there in 1999. Jim was a gifted motivational speaker, and was an outstanding Dale Carnegie instructor from 1971-1991. He was a past Board member of RIFA, was on the Chamber of Commerce's Training Committee, and held various chairman positions with the Rotary Club. He was a devoted member of St. Mary's Catholic Church and an active Fourth Degree Knights of Columbus member. In every aspect of his life, Jim was passionate about helping others. He was the recipient of St. Mary's Parish Mater Dei Award and JMCGH's Humanitarian of the Year Award. Jim was preceded in death by his parents, brother Robert C. Wilson and sisters Margaret Wilson, Helen Sherman and Elizabeth Peters. He leaves his wife of 58 years Joan M. Laurin Wilson; daughters Eileen (John) McKeever, Catherine (Bill) Gurley, Donna (Doug) Dixon, Barbara Wilson; grandchildren Taylor, Jordan and Andrew McKeever, Patrick and Rachel Gurley, Laurin and Matthew Dixon; brother Donald F. Wilson; sister Jane Simpson; 19 nieces and nephews. Visitation will be at St. Mary's Catholic Church at 10:45 am on Tuesday October 18, 2016, with a funeral Mass following at 12:00 pm officiated by Father David Graham. Burial will be at 11:30 am Friday, October 21, 2016 in the West Tennessee State Veterans Cemetery in Memphis, TN officiated by Monsignor Al Kirk. Memorials may be made to St. Mary's Knights of Columbus Jim Wilson Christmas Partners, care of St. Mary's Catholic Church, 1665 Highway 45 By-Pass, Jackson, TN 38305. Friendship Funeral Home 731-677-2673 731-677-2673

The family of James Bradley Wilson created this Life Tributes page to make it easy to share your memories.

Send flowers to the Wilson family.