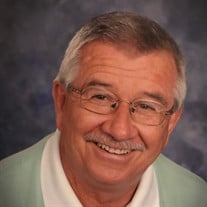 Funeral services for Jerry Wayne Wallace, 68, will be 10:30 AM on Saturday April 28, 2018 at the Meridian Baptist Church with Dr. John Enoch officiating with burial to follow in Liberty Grove Cemetery. Mr. Wallace died peacefully on April 24,... View Obituary & Service Information

The family of Jerry Wayne Wallace created this Life Tributes page to make it easy to share your memories.

Send flowers to the Wallace family.