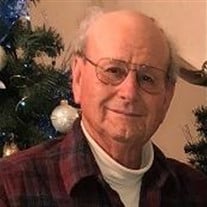 Funeral services for Karel P. Riddick 81, will be held on Tuesday January 1, 2019 at 1:00 P.M. at the Cairo Church of Christ with Philip Burse and Larry Harper officiating with burial following in the Antioch Cemetery. Mr. Riddick died Saturday December 29, 2018 after a long illness. He was born in Crockett County, TN son of the late Romis and Irene Agee Riddick and had lived his entire life in the area. Mr. Riddick was a retired farmer, veteran of the United States Air Force and a dedicated member of the Cairo Church of Christ. In addition to his parents he was preceded by a son, Ken Riddick. Survivors include his wife of fifty seven years, Lynda Burse Riddick, Friendship, TN, daughter, Rhonda Butner, (Tommy), Maury City, TN, sister, Patricia Riddick, Maury City, TN, grandchildren, Scarlett Butner, Tyler-Moss Butner, Konnor Butner and a host of nieces and nephews. Pallbearers will be Jody Miller, Daniel Boone, Tyler-Moss Butner, Konnor Butner, Chris Miller, and Bryan Burse. Visitation will be at the church Tuesday from 11:00 A. M. until service time. Memorials may be made to the Antioch Cemetery Fund or West Tennessee Children's Home in Pinson, TN. Karel had a passion for many things including Christianity, his loving wife, son, Ken, daughter and son in law Rhonda and Tommy, and all three grandchildren. He did many things that he loved like fishing, woodworking, construction and farming. Farming was his favorite hobby his whole life. After retiring he continued farming with his son in law and his handsome grandsons. He lived a wonderful life dedicated to the Lord and the working of the land. "To everything there is a season, and time to every purpose under the heaven: a time to be born, and a time to die; a time to plant, and a time to pluck up that which is planted" Ecc 3:1-2. Friendship Funeral Home 731-677-2673.

Funeral services for Karel P. Riddick 81, will be held on Tuesday January 1, 2019 at 1:00 P.M. at the Cairo Church of Christ with Philip Burse and Larry Harper officiating with burial following in the Antioch Cemetery. Mr. Riddick died Saturday... View Obituary & Service Information

The family of Mr. Karel Prather Riddick created this Life Tributes page to make it easy to share your memories.

Funeral services for Karel P. Riddick 81, will be held on Tuesday...

Send flowers to the Riddick family.