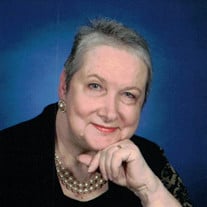 Maggie Joy Flynn was born June 28, 1943 in Perth, Australia and was diagnosed with Polio and unable to walk. She moved to the U.S. at age 13 and spent time in a Boston hospital where intense physical therapy enabled her to begin walking. At that time, she was told that at some time in the future she would revert back and be unable to walk. She was diagnosed with Post-Polio Syndrome in the early 1980's. As a result of the polio, Maggie Joy was in pain every day but pushed through it to accomplish many feats. Maggie Joy lived in Boston and attended Boston University receiving her B A degree. She volunteered with the USO and was recognized as the volunteer who contributed more time than anyone else in America. After Boston, Maggie Joy moved to Los Angeles where she met Bob and was married on November 11, 1972. She worked in Human Resources for twenty five years. Maggie Joy began a cake business as a hobby, but turned it into a business when her cake sculptures caught the attention of several people including a well known movie actress and a successful television producer. She briefly owned her own bakery which was destroyed in the 1993 Northridge earthquake. Bob moved to Jackson in November of 1995. Maggie Joy stayed in California to sell the house and joined Bob in May of 1996. She immediately became involved in many activities, organizations and projects including: Relay for Life planning committee member and publicity spokeswoman, worked as a volunteer in the American Cancer Society office, community investment panel chairperson for United Way, volunteer at the Kiwanis Club's "Casey Jones Balloon Classic" and "Skyfest", volunteer at the NAIA Basketball Tournament every year since 1997 and at the West Tennessee Health Care Foundation's annual Hole-in-One contest/fundraiser. As a member of St. Mary's Catholic Church, Maggie Joy attended Sunday School, was an Extraordinary Minister of the Eucharist at mass and for the home bound, served as a Lector, and was a sponsor in an RICA class. With the Jackson Symphony, Maggie Joy's involvement was widespread including the following activities. Board member fourteen years and secretary for over eight years, founder of the "No Hassle Classical" concert and organized the buffet dinner each year, member of the program committee for thirteen years, started the annual "Musicians Appreciation" dinner, co-chair (with Bob) of the annual "Starlight Symphony" concert, started "Friends of St. Mary's", a group which sponsors a concert each season and volunteered her time in the office, answering phones, organizing and selling concert tickets and whatever else needs doing. Maggie Joy was honored to have her name placed on a leaf on the Tree of Life at Jackson Madison County General Hospital. As predicted, Maggie's post polio symptoms caught up with her. Her mobility was becoming more severely limited and her daily pain level increased. As an unexpected result of the disease, Maggie had Facet Joint Arthritis in her spine which resulted in severe leg pain. She learned to get by on three to four hours of sleep at night and tried to catch a nap when she could. Maggie continued to work from home to stay involved in Jackson and Madison County. She was slowed by this latest setback, but worked with her doctor to get her pain back to a manageable level so she could resume her activities. Throughout all this, she kept a positive outlook and somehow managed to keep Bob healthy and in good spirits, proving that he is truly a blessed and lucky man who survives her. Services will be held at St. Mary's Catholic Church on Thursday June 6, 2019 at noon with Father David Graham officiating with cremation to follow. A visitation will begin at 10:00 a.m. prior to the service. Pallbearers will be Bill Northern, Raymond Turner, David Aherrera, Dan Breen, David Geibel and David Wilson. Memorials may be made to Wounded Warriors Project or Paralyzed Veterans of America.

Maggie Joy Flynn was born June 28, 1943 in Perth, Australia and was diagnosed with Polio and unable to walk. She moved to the U.S. at age 13 and spent time in a Boston hospital where intense physical therapy enabled her to begin walking. At... View Obituary & Service Information

The family of Maggie Joy Flynn created this Life Tributes page to make it easy to share your memories.

Send flowers to the Flynn family.