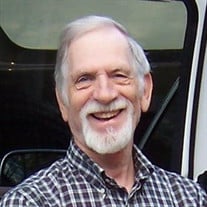 Funeral services for Melvin Roy York, 76, will be held Sunday, November 10, 2019 at 2:30 p.m. at the Friendship Baptist Church with Dr. Jerry Drace and Dr. Mike Melton officiating with burial to follow in the Bellevernon Cemetery. Mr. York died Wednesday November 6, 2019 at his residence. He was born in Memphis, TN son of the late Roy and May Dell Bates York and had lived in Crockett County most of his life. He was a graduate of Lambuth College in Jackson, TN and received his degree in pharmacy at the University of Tennessee. He was the owner of the City Drug Company in Maury City and was part owner and pharmacist of Alamo City Drug. He was a member of the Friendship Baptist Church where he served as a deacon. He is survived by his wife Connie York, Maury City, TN, sons, Brent York (Cheryl), Orlando, FL, Brandon York, Bowie, Maryland, brothers, Larry York, Columbia, TN, Joel York, Crossville, TN and grandchildren, Meredith and Jonas York, Orlando, FL. Pallbearers will be Terry Harris, Jim Lavenue, Marty York, Craig York, Chris Johnson, and Ron Williams, Honorary pallbearers will be Frank Brasfield, Bill Summerlin and Kenny Webster. Visitation will be at the funeral home on Saturday November 9, 2019 from 5-8 p.m. Friendship Funeral Home 731-677-2673.

The family of Melvin Roy York created this Life Tributes page to make it easy to share your memories.

Funeral services for Melvin Roy York, 76, will be held Sunday,...

Customized sympathy cards. Mailed for you.