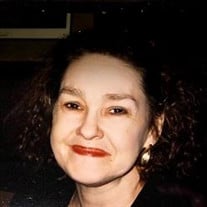 Patricia Anne Joyner Turner died on September 28, 2018, following a valiant, life-long struggle with the ravages of Type 1 diabetes. Born in Memphis on October 14, 1946 to B.C. and Ethel Joyner, Patsy grew up in Jackson with her paternal aunt, Bennye J. Bonds (Vernon) along with Patsy's sister, Emily J. Smith. Patsy was a graduate of Jackson High School and Union University, where she received a Bachelor of Arts, studying English, Religion and Social Work. As a teenager, Patsy received lessons in the art of elocution from Miss Elizabeth Ingram; her proficiency in this lost art was evident whenever she spoke publicly. Her love of people inspired her to become a dedicated social worker and many remember her from her career days at Regional Hospital and other agencies. On May 10, 1972, Patsy married Prentice Raymond Turner and they welcomed beloved daughter Anna-Carolyn Jackson Turner Rogers (Patrick) on December 4, 1982. Patsy's grandchildren were the lights of her life: Calvin Jordan Miracle (16), Carrie Ann Rogers (12), Patrick Carey Rogers, Jr. (9) and Turner Alan Rogers (2). Patsy's life passion was her service to God and to St. Mary's Catholic Church and its people. She was an eloquent lector and a minister of holy communion, and an avid participant in Bible study classes. Patsy loved the saints and could, off-the-cuff, name a saint for any cause or illness. She received a papal blessing from Pope John Paul II and was selected by Mother Teresa of Calcutta as a lay member of her order, the Missionaries of Charity. She organized the Multi-Cultural Committee, sponsored the annual Afro-Centric Mass and was instrumental in the formulation of the Academic Angel Program, benefitting Haitian children. She was involved in numerous other committees and projects at St. Mary's; however, most beloved to her was her service on the RCIA (Rite of Christian Initiation in Adults) team, sponsoring countless candidates seeking membership in the Catholic Church, and serving for over 30 years. Patsy was well-loved in the community for her untiring concern for others and her ever-present courage, uncomplaining nature, and infectious smile in the face of constant pain, frailty and illness. Proof of her dedication to others is indicated in her service on and involvement in numerous community committees, clubs, and boards, including: Contemporary Junior Woman's Club (founding member and past President), Jackson Area Social Services Council, FISH, WRAP, Jackson Jaycettes, Jackson Center for Enrichment and Development, Friends of Black Children, Jackson Symphony League, Jackson Humane Society, Mutual Improvement Society, Shakespeare Circle, LANA, Downtown Dogs Group, Lambuth Jewish Project , Christian, Jewish and Muslim Discussion Group, Tennessee Citizens Against Capital Punishment, Area Relief Ministries, 100th Man Project, Mayor Farmer's Diversity Project, HANDS, and the court-appointed Bi-Racial Committee, representing the NAACP. Patsy also was recognized by many organizations and received numerous awards, including: Jackson Jaycettes Young Woman of the Year 1978, Altrusa Woman of the Year 2000, St. Mary's Mater Dei Award, Dr. William Hose Award for Evangelism in the African American Community, Woman of the Year (Jackson Business and Professional Women), NAACP Community Activism Award, and St. Mary's Multi-Cultural Award. Patsy was a voracious reader, an eloquent writer, a talented artist, an inspirational speaker, and an excellent cook. In addition, she had a secret and inexplicable fascination for reality TV and cheap tabloids, which she would admit gleefully, when cornered. She had an extensive book and cookbook collection, and also loved "redbirds", flowers (especially sunflowers). angels and cats. In addition to her husband Raymond, her daughter Carly and her family, and her sister Emily, Patsy leaves also a niece, Cara Stegall (Blake), a nephew, Andrew Smith (Bri), and great-nieces and -nephews Ryker, Zander, Stella, Lincoln, a new great-nephew due in November, and other family members. Visitation will be at St. Mary's Catholic Church in Jackson on Monday, October 1, from 6:00 p.m. to 8:00 p.m. A service will be held at the church on Tuesday at 11:00 a.m. , with burial at Mount Calvary Cemetery. Memorials may be made to the Juvenile Diabetes Research Foundation or the St. Mary's Academic Angels Scholarship Fund: 731-668-2596. "And what does the Lord require of you? to act justly and to love mercy and to walk humbly with your God". Micah 6:8

Patricia Anne Joyner Turner died on September 28, 2018, following a valiant, life-long struggle with the ravages of Type 1 diabetes. Born in Memphis on October 14, 1946 to B.C. and Ethel Joyner, Patsy grew up in Jackson with her paternal aunt,... View Obituary & Service Information

The family of Patricia Anne Turner created this Life Tributes page to make it easy to share your memories.

Send flowers to the Turner family.