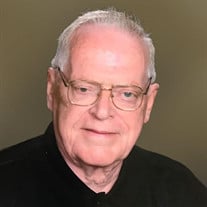 Victor Walter Buchholz Sr. of Jackson, TN died peacefully at home on December 30, 2016. A faith filled family man, known for his boisterous laugh and sense of humor, he loved his family friends and lifelong Catholic faith. As he loved to tell, Victor was born on June 24, 1939 son of the late Walter & Mary Pokorny Buchholz in the family car in route to Sister’s Hospital in Buffalo, NY. Being the winner of that “race” his parents gave him the name Victor. Raised in Buffalo, NY, son to European immigrants, he worked at an early age in the family bakery and often told stories of carrying 50 pound bags of flour-one on each shoulder “back in the day”. When not at the bakery he loved growing up with his brother Wally, sister, Linda, and his dog Princess. He often shared fond memories of the garden his beloved mother tended. Victor served as a MP in the Army from 1963 to 1965. After being honorably discharged, he met and married the love of his life Helen I. Shalaty, his wife of 48 years. While living in Tonawanda, NY they had three children, Victor Jr., Patrick, and Angela and Victor began a long career with Columbus McKinnon Corporation, which moved his family to Tennessee in 1971. In Tennessee, their family became members of St. Mary’s Catholic Church in Jackson, where Victor served in a number of roles in the life of the parish until his passing. He assisted with the opening of the Divine Will and Mercy Chapel at St. Mary’s. He was a Fourth Degree member in the Knights of Columbus, where he served as Grand Knight, Faithful Navigator, Faithful Comptroller, TN State Program Chairman, District Deputy, and Associate Representative to the Supreme Convention. He was instrumental in forming the Knights of Columbus Councils in Paris and Savannah, TN, and served as the Chairman of the Henderson County United Negro College Fund. Victor retired as Human Resource Manager from Columbus McKinnon Corporation in 2003. After retirement, he began his second career of maintaining his back yard as a virtual Shangri-La, he doted on his beloved grandchildren, cheered on the Buffalo Bills, picked up grandkids from school, and attended countless grandchild sporting events. Victor is survived by his wife Helen Buchholz, brother, Walter Buchholz, Jr., sister Linda Buchholz Schalk, three children Victor Buchholz, Jr. (Kimberly), Patrick Buchholz (Renee), Angela LaFont, (Bill), seven grandchildren Mary Kate Buchholz, Nicholas Buchholz, Madeline Buchholz, Elizabeth LaFont, Michael Buchholz, Rachel LaFont, and Luke LaFont and a large extended family of nieces, nephews and cousins. Visitation will be at St. Mary’s Catholic Church on Monday, January 2, 2017 from 5 – 8 pm with a Rosary at 7:30 pm. A Funeral Mass will be held at St. Mary’s Catholic Church on Tuesday, January 3, 2017 at noon with Father David Graham officiating. Burial will follow in Ridgecrest Cemetery. Donations in honor of Victor can be sent to Birthright of Memphis, Christian Girls Home of Moron Haiti, and St. Mary's Church. Please remember Victor and his family in your prayers. Friendship Funeral Home 731-677-2673

Victor Walter Buchholz Sr. of Jackson, TN died peacefully at home on December 30, 2016. A faith filled family man, known for his boisterous laugh and sense of humor, he loved his family friends and lifelong Catholic faith. As he loved to tell,... View Obituary & Service Information

The family of Victor Walter Buchholz Sr. created this Life Tributes page to make it easy to share your memories.

Send flowers to the Buchholz family.